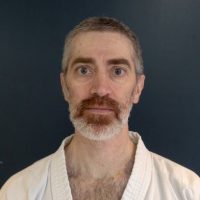 Mitch grew up in the Chicago area, and began practicing Karate with Dominick Pizoli in 1991. He has been practicing ever since. In 1998 – 1999, Mitch practiced with Israel Shotokan while on sabbatical in Jerusalem, and became a shodan in 1998 while training there. Mitch returned to Israel in the summer of 2019 for Special Training, and was promoted to nidan. Mitch currently resides in Chicago together with his wife and six children. 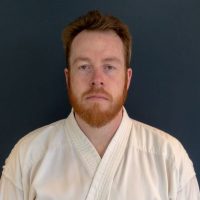 John began practicing karate in 1999, when he was a student at Northern Illinois University. John was awarded the rank of sandan (third degree black belt) in 2013. He is a regular at regional special trainings (rigorous training sessions lasting 3-4 days), which are held 3 times a year across the Midwest. John was also selected to represent the Midwest region of Shotokan Karate of America at 2007 Nisei Week karate tournament in Los Angeles, which is the oldest karate tournament in the country. He has been leading karate practices since 2003, while he was still a brown belt. John was selected as SKA’s Midwest Member of the Year for 2007 for his commitment to SKA and his students, for representing the Midwest region in the Nisei Week national tournament, and for organizing several exchange practices with other clubs and seniors in the area. In addition to practicing with the Chicago dojo, John also leads the Southwest Chicago Shotokan dojo located in Lockport, Illinois. 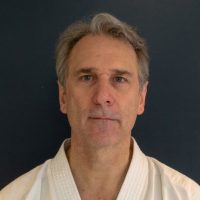 Steve started practicing karate at the University of Chicago in 1981, working his way to ikkyu (the rank immediately below black belt). After finishing school, starting his professional career became the main focus of Steve’s life. To do so, Steve took a break from practice. 20 years later, when Steve’s son started taking martial arts lessons, Steve’s passion for practice was re-ignited. Steve looked up John Wood on the web, and started training with John in early 2005. Steve picked up right where he left off, and after only a year and a half, he earned the rank of shodan (first degree black belt). Steve was awarded the rank of nidan in June of 2008, and sandan in June of 2018. 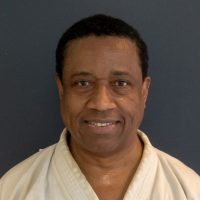 Vincent joined Shotokan Karate of America in 1989 as a student of Dominic Pizoli at the Downtown Sports Club and East Bank Club of Chicago. A pelvic hernia forced Vincent to take a break from practice from 2005 to 2015. He is now back into practice where he left off, and has one of the strongest spirits in the group. He is looking forward to continuing his journey of having karate as “a way of life”. Outside of practice, Vincent is an Industrial Designer, with a B.S. in Industrial Design from Institute of Design, Illinois Institute of Technology. 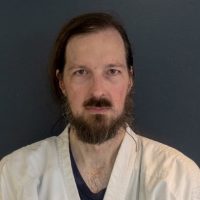 Andrew began practicing karate after graduating from college, and fell in love with it. When he is not practicing karate, he is a high school teacher of math and computer science. The thing he finds most amazing about practicing with Shotokan Karate of America is the generosity of the seniors – year in and year out, always patiently offering suggestions to improve. Andrew was awarded the rank of nidan in June of 2019. 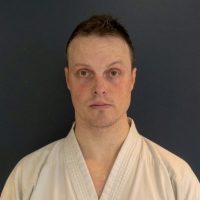 Khanda is from Urbana, IL, where he began practicing karate with the Illini dojo in 2000. Khanda’s early training had a depth oriented approach, with a typical bread-and-butter practice consisting of 2,000 oi-zuki (lunge punch) followed by a few minutes of ‘continuous attack’ pre-arranged sparring. He joined the Chicago dojo upon moving to the city in 2007. He lives and works on the North side, and is all-season cyclist and bike commuter. 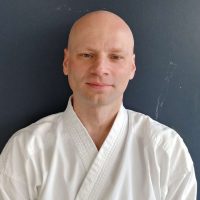 Vladimir began karate practice in 2003, and was awarded the rank of shodan in 2013 after the Summer Special Training in Kansas City. He currently practices with the Chicago dojo.